Recently I bought Sean and I an Apple iPad air 2. (He paid some money towards it don’t worry). I spent a little time contemplating which one I should get.

But I am very happy with my choice, and I decided its time to tell you why. You may also be asking yourself the same question, and stuck on what one to buy.

Do I buy the new pro (9.7 inch), for a whole lot more money, or do I go with the new iPad Air? – That was the question my brain and Sean were fed up of hearing.. Yawn.

Now of course, if you have the money to spend on a pro, and you wont cry about it like I would have. (Still did over the Air 2..) then go ahead! Its an amazing device, with so many cool things and gadgets.
But I was not prepared, and not convinced enough.

So during this post I will be explaining my reason as to why I chose the iPad air 2.

I know it says this is a review in the title, and it kind of is, but for non tech-quick-answer kinds of people like me. I dont want to technical info, I just want a few convincing points!

(Before you read this, please keep in mind – this is my own opinion, I am not being horrible or slating Apple, I love Apple products, but this is a big-ish decision!
I am of course going to big up my own iPad, but both are great devices, and you should purchase whichever one you want, and not let my decision sway you, if you dont want it to.)

I have never had an iPad before – lets clear that up.
There are no older versions to compare the iPad air 2 with, but I guess my opinion can be valid, if you too, are someone buying an iPad for the first time.

I spent so much time I will never get back, thinking about what iPad to buy.. When the answer was pretty simple.

So if you are reading this post, you are doing the same thing I did – researching other opinions, to hopefully sway your own.

Now we all know that the Pro is absolutely gorgeous…

)
I am in love, yes still in love with the rose gold, which is NOT available in the iPad Air 2.

But the gold is still pretty nice in the iPad Air 2? But I couldn’t possibly spend so much more, just because I liked the colour better… Actually I could have bought it to be honest, but I didn’t need to.

I searched the internet looking for advice, reviews, videos, comparisons, and many of them said that the Pro just really isn’t worth it if you do not need the new features – which I really didn’t.

I also read that their are not enough differences between the two to justify the price of both of them.

The new features for the Pro is what really makes it expensive, I knew I wouldn’t really use the nearly £100 Apple pen, or the keyboard, so that feature was pointless to me.

I wasn’t too bothered about the back light feature either, I probably wouldn’t even notice the difference, the speakers are better on the pro too, but yet again, not a big deal.

The Pro is also faster than the iPad Air 2, in the technical terms its a big difference, but comparing the two (I watched videos to find this out) you cannot really tell that the Air is slightly slower.

What I Use The iPad Air 2 For:

The sole purpose of my iPad air 2 is to up my game on social media, in order to boost the popularity of my blog. I also just wanted to treat myself and buy a new gadget, because its fun.

My iPad is used to plan, prepare, jot down draft notes, and share my posts everywhere.

Obviously i use it for fun, there are millions of apps and games for the iPad, so of course I spend some time (wasting it) playing games.

Face time! I never ever liked to face time on my phone, I have no idea why, but its so much more fun on the iPad air 2 now! The quality of the camera is better and you can still use your iPad whilst face timing.

Airdrop is such a great feature, especially if you have an iPhone too. I decided not to transfer my over 1,000 images onto my iPad, instead I just air drop the ones I need, and edit them on my iPad if I have it with me.

I use it to read and reply to emails, its just nicer having a bigger screen.

The camera is pretty good, not that I find it a convenient device to photograph with.

I make notes on everything! You can also draw cute little pictures on your iPad Air 2 on your notes, I also spend a lot of time doing this!

The iPad is just something different to your phone, if you are someone who gets bored, then get an iPad, its sooo much more fun than your phone, which is essentially a smaller version of your iPad…

And that is it really… I guess I could use it for more, but I am still learning how it works! Overall, I love my iPad, and do not regret my decision, which is the main thing.

iPad Air 2 vs The iPad Pro:

The iPad Pro in a nutshell – Apple ‘claims’ that this device could replace your laptop due to its pen and keyboard (which again, cost ridiculous amounts).
I mean, it probably could if you really like Apple products that much, but I personally think I will always use windows, and a ‘proper’ laptop (by this I mean NOT apple).

The iPad Air 2 in a nutshell – An updated version of the old iPad Air, and an iPad that has very little differences to the new 9.7 inch pro.
Still a great device, and does what ever you would need an iPad for, you just cant draw professionally on it, or have a keyboard that attached.

You can get Bluetooth keyboards for your iPad Air 2 (and any other iPad I think..) so you do not need to buy an expensive one.

Do you really want to draw on a device, and not have it on paper? I much prefer using paper to draw, make notes, and all that jazz. I think its more fun, and old fashioned. If you are a pro at drawing then go ahead, but its not the same experience really now is it?

The iPad Air 2 is for someone who is a first time buyer, and using the iPad daily for regular uses.  (Probably most of you).

Apple iPad Pro 9.7 is for humans who are familiar with Apple, who can draw, and who want to have a new laptop.

iPad Pro also has an AMAZING camera, but again, if you aren’t going to make many pictures with it, there’s not much point, just buy a camera..

Of course there are so many products and accessories you can buy for your iPad. I always turn to Amazon prime for their next day delivery.  I am a VIP (very impatient person). So here a few products you should probably check out:

Thank you for reading this post, I hope you I have helped you make a decision!

How I Found My Blog Name

Changes To Make This Year 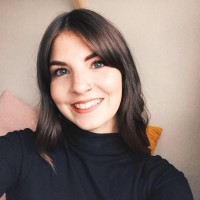 Hello!
Welcome to my lifestyle blog.
Here you will find posts about life//fashion//health.

I have another blog called; writtebycharlotte.com,
where I post about books, and writing.